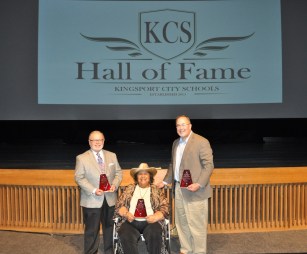 The start of a new year also brings the opening of nominations for the Kingsport City Schools Hall of Fame.  The Hall serves as the keystone award for former KCS employees that have significantly impacted the children and educational community of Kingsport.  Now in it’s third year, KCS is seeking outstanding nominees to be recognized.

Were you positively impacted by an outstanding educator while you were a KCS student?  Was your child’s life touched by a wonderful bus driver, cafeteria worker, assistant, or custodian?  Did you see how an effective administrator made a difference in a child’s future?  The KCS Hall of Fame serves to honor ALL employee types, and you can help nominate these worthy employees!

Who has already been inducted into the KCS Hall of Fame?  This week, the Saturday Six (plus 1!) looks at the wonderful inductees from the first two HOF classes.