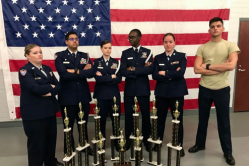 Though it may be front and center in the minds of KCS children and educators these days, standardized testing is only one measure of how well prepared students in Kingsport City Schools are for the exciting and challenging futures that await them.  Both inside and outside the classroom, our students are participating in a wide variety of district, regional, and state-wide competitions to test their applied knowledge and skills.

How are KCS students pursuing excellence?  This week in the Saturday Six, we’ll take a look at the KCS Science Olympiad Teams and the Dobyns-Bennett Air Force Junior Reserve Officer Training Corps (AFJROTC), who have been competing in various venues over the past few months.

Students at Kingsport City Schools are provided with many opportunities to demonstrate their academic prowess, work collaboratively toward a common goal, and achieve extraordinary results against well-trained peers.  Whether in academics, fine arts, athletics, or leadership, KCS students are succeeding and setting new standards for themselves and those students who will follow in their footsteps!